An Enterprise of the Salt River Pima-Maricopa Indian Community

The Man in the Maze legend is the symbol of life for the Salt River Pima-Maricopa Indian Community. According to this teaching, man journeys inward to seek knowledge and truth. The search is both real and symbolic. 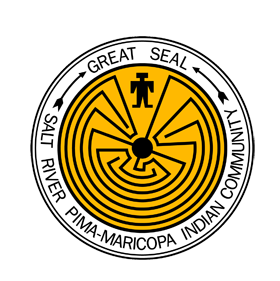 The Pimas, who believe themselves the direct descendants of the Huhu-kam (or Hohokam), have a long history of giving freely of themselves to help others. They welcomed the Maricopa tribe into their midst after that tribe was chased from their homelands along the Colorado River by warring Apaches and Quechans.

In the 1800s, the Pimas and Maricopas provided the U.S. Military, gold prospectors, and pioneers with supplies of food and water. When, to accommodate the influx of settlers, the U.S. government ultimately dammed the rivers and cut off the tribe’s water supply, some farming families were forced to relocate from the Gila River to the Salt River.

By 1878, with 600-700 Pima and Maricopa people living and farming along the Salt River, the U.S. government established the Salt River Reservation in 1879.  Originally extensive, the size was dramatically reduced when non-Indian settlers objected to the Indians being given so much land.

In time, politics and lack of water doomed the traditional agrarian way of life. Despite agreements and court decisions, water was diverted from tribal farms making farming nearly impossible.  When the Dawes Act of 1910 took effect at Salt River, it attempted to replace the centuries-old system of family farms with individual allotments of land.  These allotments were divided into 10 acres below the Arizona canal and 20 acres of secondary land above the canal, with the 20 acre parcels having no rights to irrigation water.

To regain some control over its land and government, on June 15, 1940, the Salt River Pima-Maricopa Indian Community adopted the Indian Reorganization Act. Over the next 60 plus years, it established a sophisticated system of government, launched successful business enterprises, and began rebuilding the Community.

Observing cultural teachings, the Community considers the impact on the next seven generations of every land use or business decision.